The reason why I created this series of articles is that it’s the series I wish I had when I was first learning Angular. I faced many problems while building Angular apps and really I wish I had every part of this series before, that would have saved a lot of time wasted on solving silly problems.

This is the first part in a seven-part series about the JavaScript framework, Angular 5. This is not intended to be a complete guide, but rather an overview of the basics to get you up and running so you can get to know Angular 5+ and understand what the framework has to offer.

I’ll assume that you know what npm is. First we need to install a command-line tool named angular-cli. You can do that using the following command in your terminal.

Now, we installed angular-cli, so we can use it to generate our application.

From your terminal change your directory where you want to build your app, I’ll name our app wb-gy as my own domain wb.gy :3 Before running the next line read the quote after it first.

BTW, I’m going to use this one.

You should see this message after many lines of installing steps.

Let’s explain every part: I mentioned before the use of every part but I’ll show what each argument does

I know that you might be afraid of using the previous line with all these options. But really If I were you I’d use most of them. There might be some people would argue with me about the test part. I know, but I prefer not using them in the beginning.

Now change the directory to our application

and let’s run our server

and open http://localhost:4200 in your browser to see your app. But, If you want to run the server and open the application in the browser immediately run:

You should see the next page in your browser

Open your application in any text editor. BTW I’m using VSCODE and I’m a big fan of it, If you’re looking for learning how to generate components and services in your application. You can check the documentation of angualr-cli.

But I can give you some quick explanation, If you want to generate new components you can run 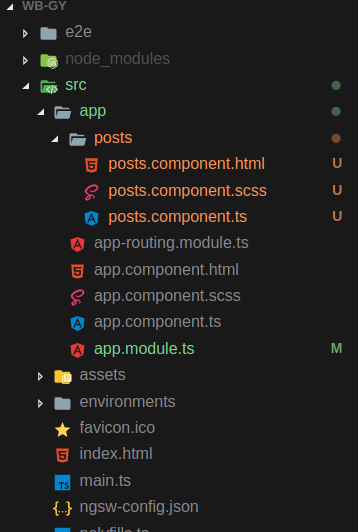 We’ll use it later to display some posts using any api.

Now we can add this component to our routes Open app-routing.module.ts You’ll find it like

Now how to make our routes work!

Open src/app/app.component.html and remove all the code and add this simple code

Let’s explain every part of our code: First in the a tag there is an attribute routerLink this attr is used instead of href in angular routes, it tells our application that this url is a route. Second the html tag <router-outlet></router-outlet> it displays the view of the component.

Now check the changes in your browser, you’ll find list, try to click any link to check if our routes work or not!

I know that it’s very simple code but I just want you to understand the concept behind it and we’ll make it more complex later in the following articles of the series 😉.

I won’t explain what directives are, I’ll leave this part for you to check the documentation. We can test some directives like ng-for by creating an array of items and display them on our view.

In the posts component: Open src/app/posts/posts.component.ts. We’ll add any array of posts, here’s the result:

to display these posts, open src/posts/posts.component.html and replace the code in it with

Let’s explain the code: I just added ngFor directive, which acts like a for loop. Save changes and check your browser and navigate to posts route to see the result.

You can build more components and edit them as you wish for more practice but I’ll stop here, so our application would be simple and easy to understand.

In the next article we’ll take our application to more advanced level and use angular material to give our application a touch of styling. Visit it now Using Angular Material with `Angular5